There are two versions of T-Seps. T-Seps 2.0.2 is an older “legacy” version that works with the very old Photoshop 6.0 all the way to the latest CS6 in 32-bit and 64-bit mode. It was the next generation of FastFilms – first developed in 1999 and it works in the Actions Panel in Photoshop using a series of buttons.

T-Seps 3.5.5 is the next generation of T-Seps. It works in all CC versions of Photoshop and it runs in the Extensions Panel with have an easy-to-use graphic interface and a lot of new and improved routines. Both versions work on Windows XP (limited support), Vista, Windows 7, 8, 8.1 and Windows 10 and they work on all Mac computers with OSX 10.6 or higher.

The following Features List is for T-Seps 3.5.5. We have put an asterisk next to a feature that is not available in 2.0.2. There is also a version comparison on the Price Page HERE. 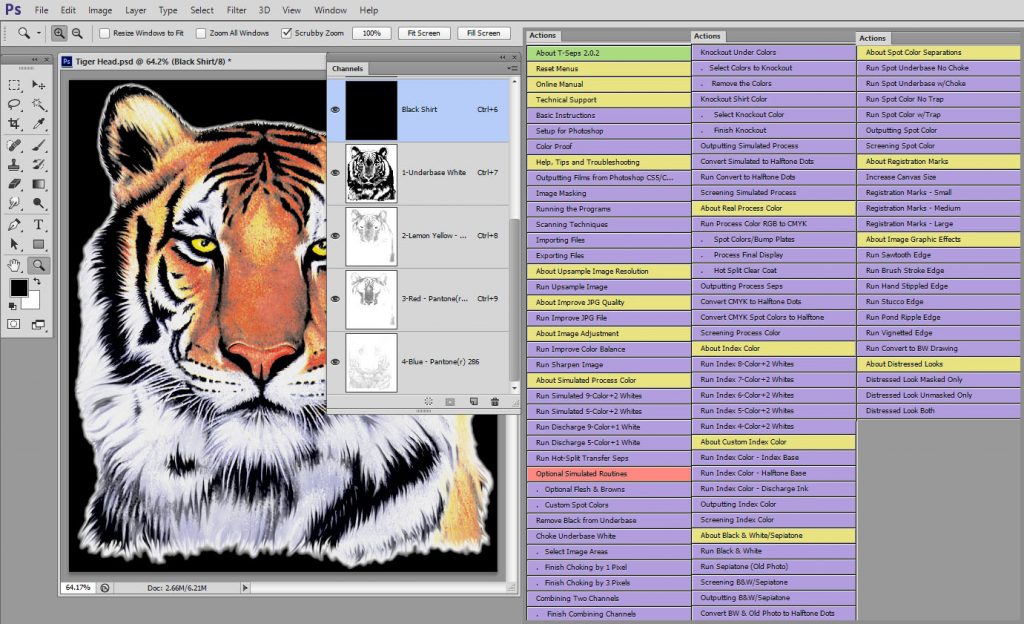 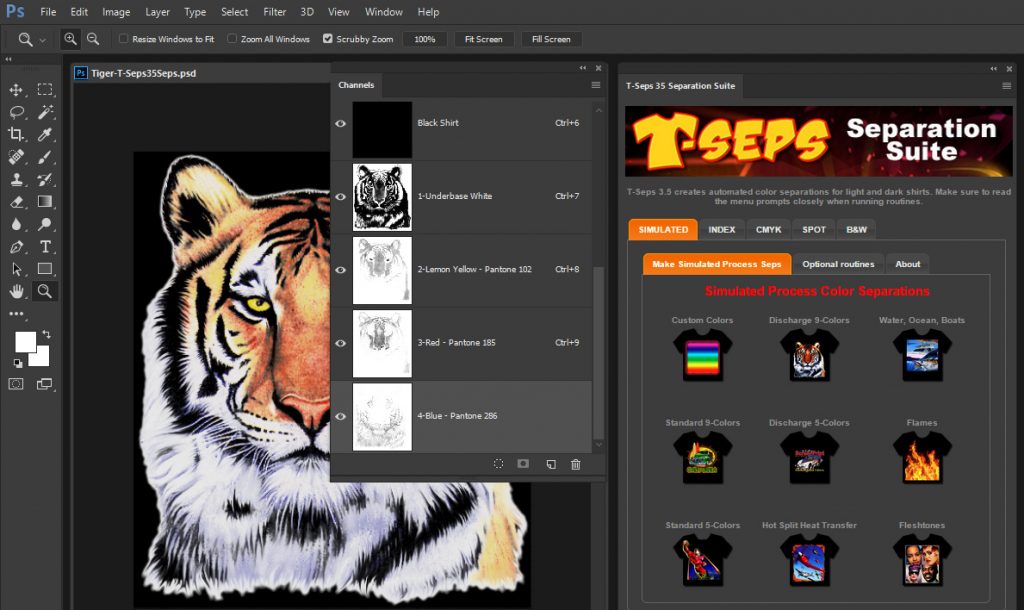 See T-Seps in Action with this Introduction Video
This video is of a webinar with Scott Fresener on T-Seps 3.0 which works in Photoshop CS6 and the first CC 2014. T-Seps 3.5.5 is identical to 3.0 but it works in all versions of Photoshop CC. This video shows all the features in action. Grab some popcorn and see how this program will help take your company to the next level. Enjoy.

T-Seps does FIVE Separation Types!
In T-Shirt screen printing there are a number of ways to do separations. Some industry programs only focus on Simulated Process color. The truth is for certain jobs that is not the best type of separation. Other programs claim to use a “magic Color Model” that uses specific colors of ink. Again, for a LOT of typical T-Shirt separations you need to often use specific Pantone colors for logos and color callouts and you simply can’t be tied to specific colors or tied down to using a specific brand of ink.

T-Seps offers a number of color separation types and it gives you the flexibility of using the right type of separation for each job. With T-Seps you get lots of choices.

T-Seps has a variety of Simulated Process routines that use off-the-shelf pre-determined colors or separations where you pick the exact colors in the image. It has special routines for images with a lot of water colors, flames, or fleshtones. And, it has routines for specialty inks like discharge – where the separations need to done different than when using normal plastisol. You get a lot of options when choosing Simulated Process Color with T-Seps. 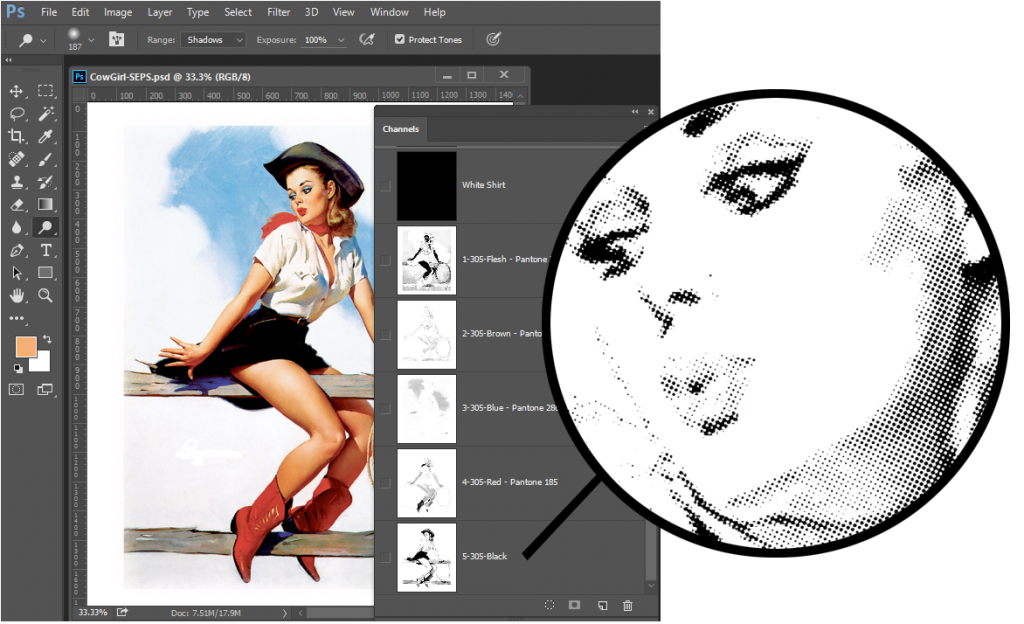 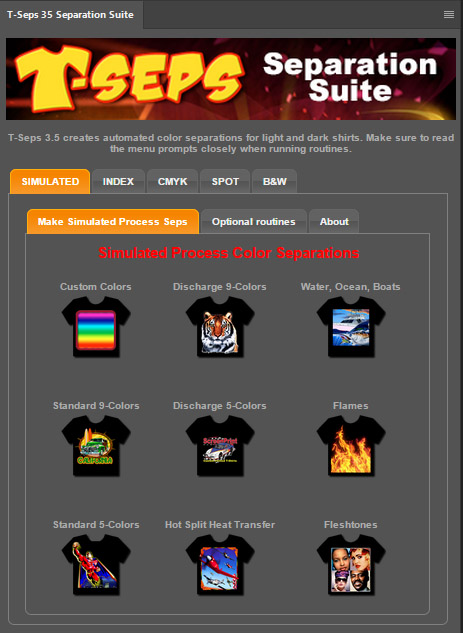 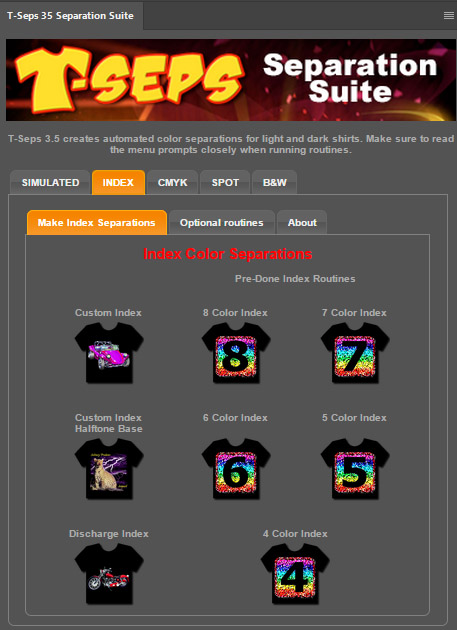 Index Color
Index Color separations are where the entire separations are made up of tiny square pixels (sometimes call “square dot” separations). They are easy to print and they work from colors you pick. Index Color likes a lot of colors and are popular with larger shops that can print eight colors or more.

T-Seps does great Index Color separations including making an underbase and highlight white. Plus, it has routines that use pre-determined color palettes and a routine for waterbased Discharge separations. 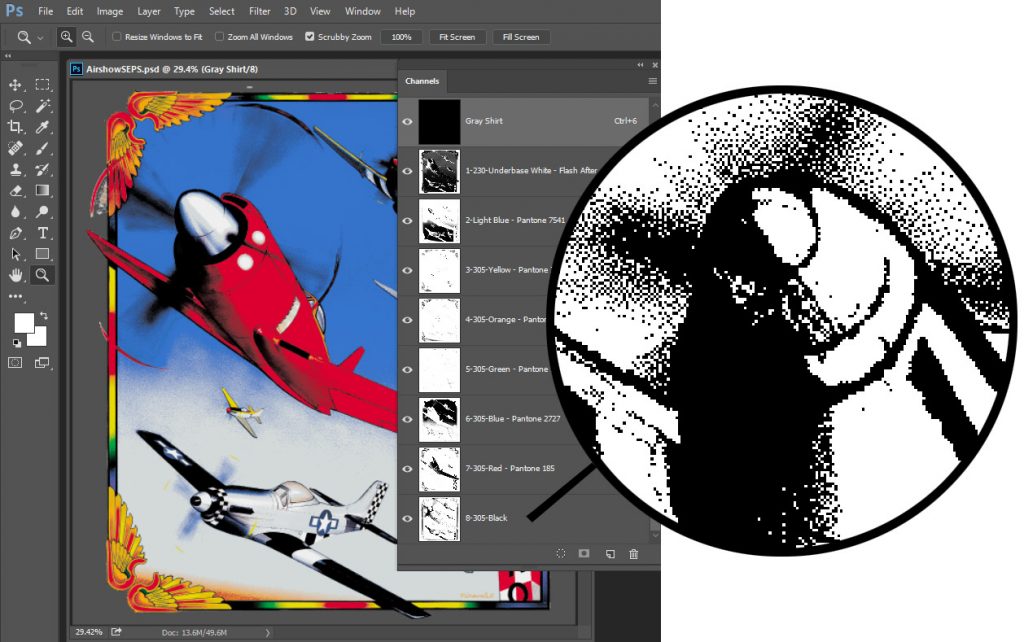 In many cases great CMYK jobs also have key spot colors for important colors, Pantone matches or logos – and T-Seps let’s you pick the additional spot colors with ease. 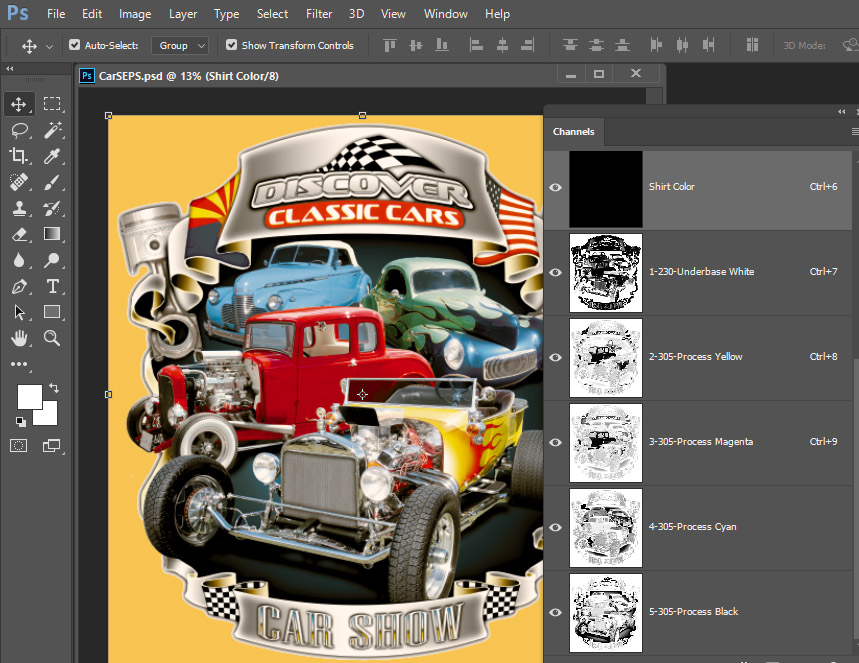 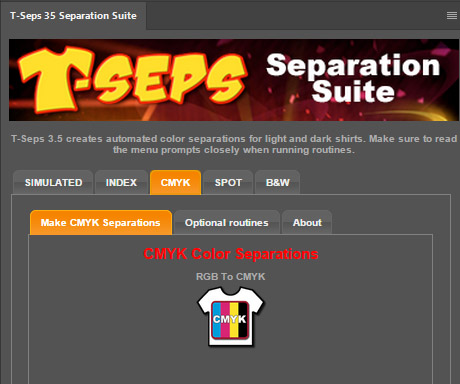 Often artists think they can just “click a button” in Photoshop and make CMYK Seps but the truth is Photoshop is set to make CMYK seps for paper printing. The same goes for CMYK seps done in Corel Draw and Adobe Illustrator. These will NOT work for T-Shirts. T-Seps does a lot under-the-hood work to adjust for dot gain, ink impurities and under color removal. In fact, T-Seps is supplied with Ink Values for some of the popular ink brands so it separates based on the ink brand you are using! 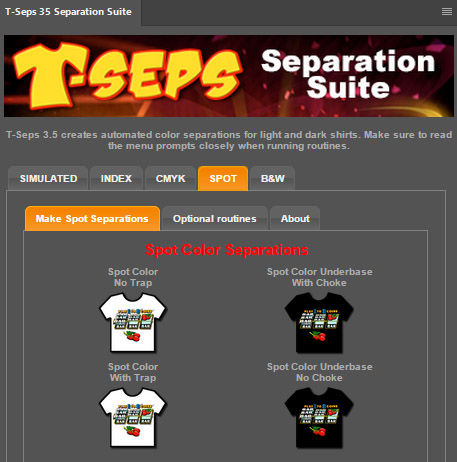 Spot Colors
T-Seps does a great job of doing spot color everyday jobs that have no halftones and are just solid spot colors,  If a simple job is built in a vector program like Illustrator or Corel Draw – you don’t really need T-Seps to do the separations. But, in today’s market where the customer often provides a JPG of a spot color image – it is MUCH easier to separate this with T-Seps in Photoshop. 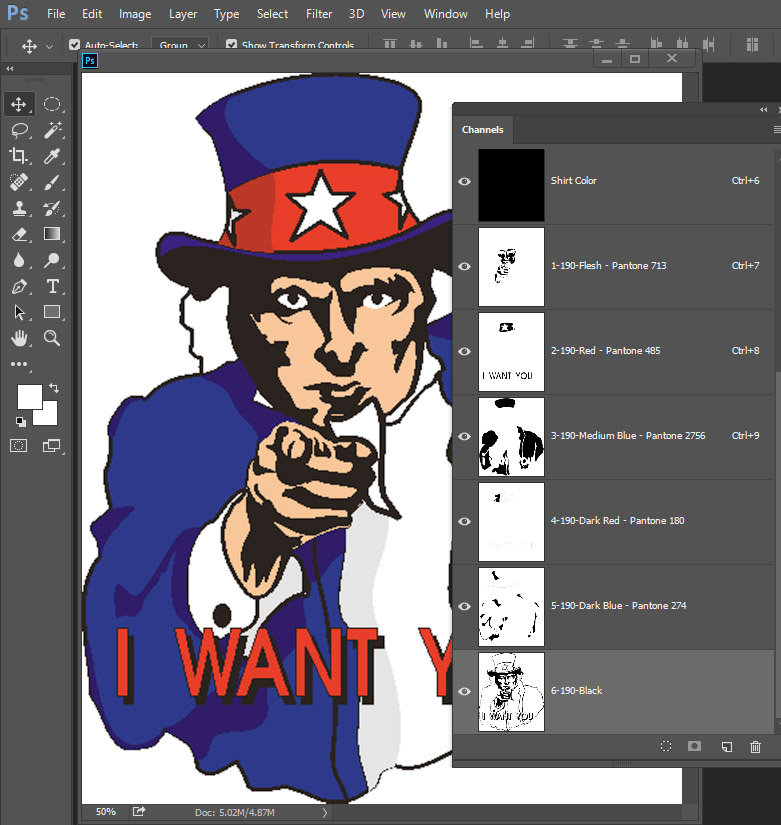 Black and White Monochrome
This is a very popular look and T-Seps does an outstanding job of doing Black and White seps. Most great seps like this (especially on dark shirts) are made up of three or four colors – including an underbase white and highlight white and one or two shades of gray. And, if you want more of an old photo look “sepiatone” looks T-Seps really nails it. 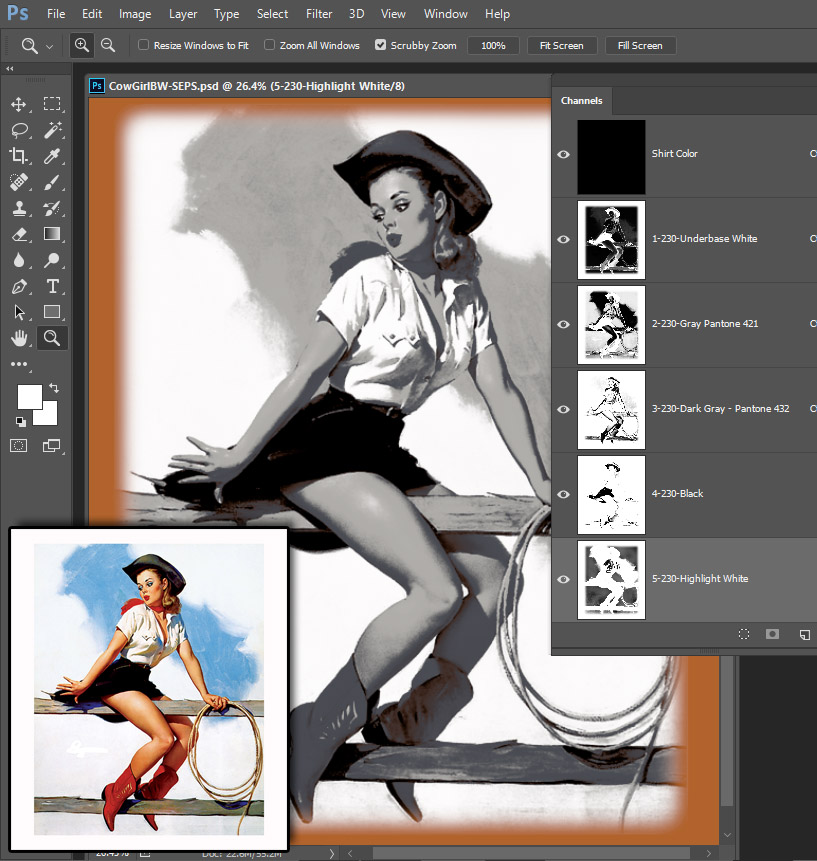 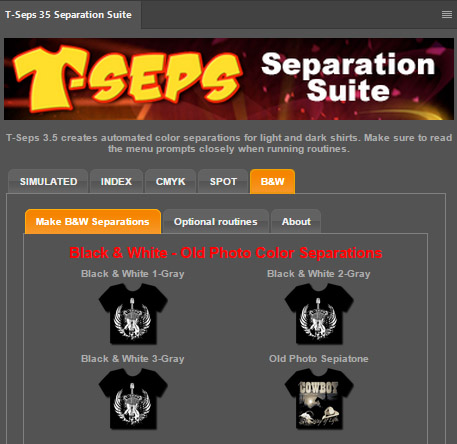