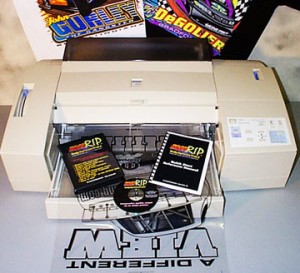 All the Epson 3000 users (and similar printers from five or six years ago) ask me regularly, “Why is this clear film so hard to find these days?”

For years, clear film was the least expensive product for inkjet film positives, and did a perfectly satisfactory job for burning screens. It took a little while to dry so we couldn’t stack our printed films right away, but it was simply the nature of the beast.

As Epson 3000s, the Cadillac of output devices, head one by one to the junk heap, the market for standard clear film gets a little bit smaller. Every dead Epson 3000 means one less device using standard non-waterproof film.

Ladies and gentlemen of screen making, I have sad news for you if you’re using standard clear film. Fewer and fewer manufacturers are making this product. As a result, fewer and fewer suppliers are carrying this product in deep inventory, if they still carry the product at all. This film will likely disappear altogether in the next 18-24 months unless some innovation in the industry makes it viable for use with the new printers on the market.

But I have good news too. The very expensive waterproof film of the past – that dries faster and accepts ink better – has been steadily coming down in price for the past year or so. In fact, the prices on waterproof today are certainly in the neighborhood of the prices we were paying not too many years ago for standard clear film.

Sooner or later (probably sooner) we’ll all be using waterproof film. On the plus, it’s a better product, for very close to the same prices we’ve paid in the past for standard film.

Fresener-Greaves T-Shirt Report is Back! Check out our latest show.