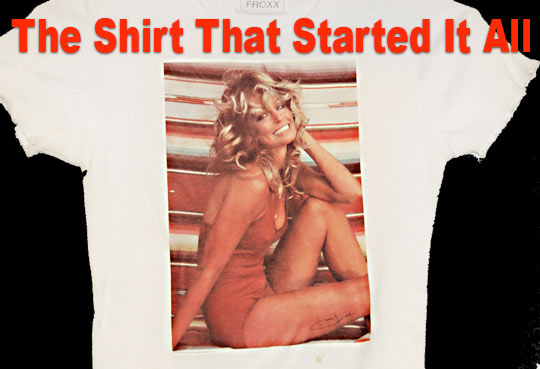 The shirt that started it all has been re-released!

Wow, has this industry changed. For those newbies and even some who think they are old timers, how many of you can remember the shirt on the left? Yes, I own an original Farrah Fawcett shirt circa 1976. In fact, back in 2002 Impressions Magazine was doing a 25th Anniversary issue and I can remember editor, Marcia Derryberry, calling me in a panic saying she had looked hi and low for a Farrah Fawcett shirt until someone said “Fresener has one.” This shirt appeared in that issue. I made her sign in blood that she would return the shirt.

The history lesson is this was “the shirt” that started things really cooking. Impressions Magazine was launched in 1977 (Bill Windsor where are you?), and between Impressions, the Farrah Fawcett shirt, and some very smart entrepreneurs, a real industry was born. In fact licensed products were a brand new novelty back then. I think the Farrah shirt taught corporate America there was gold in T-Shirts and merchandise.

UPDATE: Fast forward to today. Farrah Fawcett’s iconic one-piece red bathing suit pose is being re-issued onto a men’s T-shirt, with part of the proceeds going to the late icon’s Farrah Fawcett Foundation.

“Our mission is to carry out Farrah’s wishes by helping to fund cutting-edge research as well as to help people who are struggling with this disease [cancer] today,” says Farrah Fawcett Foundation President and close friend Alana Stewart.  The T-shirt, which retails for $24, is available at all Urban Outfitters stores and also for purchase online at www.urbanoutfitters.com.

History of the Shirt
The image on the original shirt was called a “Litho” or litho heat transfer. (The new shirt is screen printed). These were the first real photorealistic shirt images. If you wanted KISS or any rock band of the day on a shirt, you had a heavy, rubbery litho transfer.  No, screen printing photorealism on black shirts had not been “invented” then.  I would LOVE to see comments on this and pictures of your old litho shirts.  Chances are you have very little image left and a white solid block of plastisol on the shirt.

These were printed on heat transfer paper using standard offset/lithography printing methods with special cmyk inks.  The image was then backed in white plastisol and the image was applied with a heat press.  There were millions of these made where the image would wash off after the first wash cycle (not good).  In fact, the heat transfer business killed itself around 1980 from bad transfers.

It is interesting that over the years litho transfers have come and gone.  They were big again a few years ago when vintage/classic images were kicking in. They have now lost favor again beaten out by all-over prints.

But hey…. they will be back!

Woodstock…I was there … or was I?

The Death of Screen Printing – written in 1996

Fun at the Magic Show