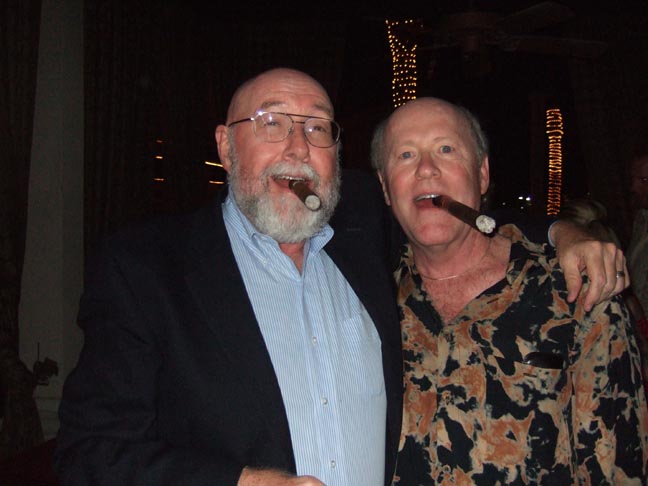 OK, this has nothing to do with business….. or does it?  I first started smoking cigars in high school.

They were called Swisher Sweets and yes, they are  still available.  No, I try my best to never smoke Swishers again unless I am in the middle of knowwhere on a trip and that is all I can get. I stopped smoking them in my early 20’s and didn’t smoke much until the last couple of years.  In fact, I never understood smoking.  I even tried to hire employees who did not smoke. It use to really irritate me when I would go outside and see a group of smokers while the rest of us were in the office working.

BUT….. I really got hooked when I was having dinner with Tom Pierce and Ted Stahl at the Atlantic City ISS Show in 2007.  At first it was a novelty.  Cool.  I’m with the boys….   But, as time went on I discovered that is was a way to chill out.  I have always been a go, go, go type A personality.  I would eat lunch at my desk and work non-stop.  Then the cigar bug caught me and I found myself enjoying taking a few minutes to enjoy a smoke. It forced me to take a break during the day.  Wow…. a break.  A novel idea!

What really brought it home was to find out at trade shows that I was not alone.  My good friend Charlie Taublieb smokes along with many others.  It became a ritual to find time for a smoke.  It was never really about the smoke but more about the fact that it forces you to first find a place you can smoke and second to enjoy a friends or business associate’s company.  In the old days you would often find U.S. Screen employees outside during a show.  Jesse, Drew, Terry, Mike Fresener and others.

Terry Combs who is a good friend and worked for me at U.S. Screen was a closet smoker and once I knew he smoked we would go out back every Friday and get a small group of employees who smoked cigars and joked it was the “finer things in life club.”  We were even going to get smoking jackets as a joke.  Oh well…. too late.

It also became a bond between my son Mike Fresener and myself. I turned Mike onto cigars and we went from working all day long to having our little cigar break at 3:00 almost every day.  He would come in my office and it would be “is it time?”  It was a great time to sit with my son and bond.  We even moved our cigar smoking “lounge” to out in front of the building so we could be alone.  We had a coffee can for our butts.

A good friend and local screen printer named John Anton, has a humidor in his office the size of a refrigerator.  John and I bond over a good cigar every now and then.

My smoke of choice today is by Drew Estates.  If you want to ready about real entrepreneurship, read the story of two guys from New York selling cigars out of a cart who founded Drew Estates.  They make a killer cigar line called Acid.  OK… I’m from the 60’s.  My favorite Acid is a small 10 minute smoke called a Blondie.  Check it out at your favorite cigar store.  AND… don’t be afraid to offer a woman a cigar.  You would be surprised the women who say “I would love to try one of those.”

Enjoy!  I would love to hear what you smoke and why.  Comments welcome!!