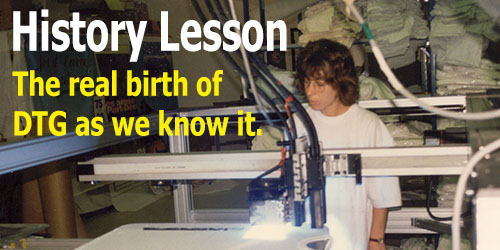 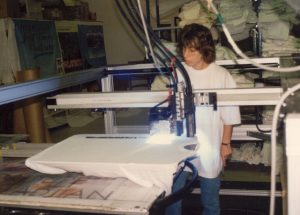 This short article is one that was first posted on the U.S. Screen website a long time ago to show that none of us were really the first to inkjet print directly on T-Shirts. I would like to think that I am a pioneer with the introduction of the T-Jet and I think in most circles I am thought of as the first to really make it happen. The T-Jet was certainly the first commercially available printer that was affordable and it was introduced at the same time Kornit brought out their machine back in late 2004. Brother was still in beta testing at the time.

And, I will lay claim to be the first to introduce white ink printing by working closely with DuPont. Without me insisting they find a way – I an convinced it would have been many more years before we had inkjet white ink.

Certainly Matt Rhome (formerly with Brother and now with Epson) was one of the first to show a machine at a trade show in 1996. Matt made a lot of claims and got a patent that has since been reversed thanks to many, many thousands of dollars spent to invalidate it. His patent was mainly on “tucking the shirt when loading it.” 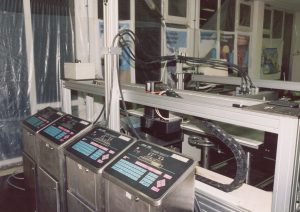 Give me a break. We often called it the “F….king patent.” He was the first in the US to show this process and he got a lot of attention. Nothing happened with this for a long time.

But the truth is, none of us were really the first. In doing research for my effort to help gut Matt Rhome’s patent and the lawsuits that were filed we discovered through our friend Vince Cahill that in fact in 1994 a company called Embleme was inkjet printing shirts in France under a government sponsored project.

Embleme was started in 1993 by Patrice Giraud as a spin off from a company called IMAJE.  It was a French government sponsored project.

The Embleme system (called D’TOPE) was unique in that is used UV curing ink printed through industrial inkjet heads.  The machine was large and nothing like we see today.  In order to speed up the curing process UV lights were actually attached to the printing head to help cure the ink immediately after it was printed.

The printing mechanism was designed much like a typical carousel printing press.  Two arms held a typical platen.  The shirt was loaded or draped over the platen and then the sleeves or excess garment material (in the case of a thick sweatshirt) is tucked under the platen to keep it out of the way of the machinery.  Again, all procedures adopted from traditional screen printing on T-Shirts. The operator would then send a command from a graphic program and the shirt would be printed.

Like today’s machines, the Embleme machine could also print on yard goods, towels, and even mousepads.

Due to funding cuts this project was abandoned in 1997.

We were able to obtain a short and very poor quality video tape of this machine in action and would like to thank Patrice Giraud for providing this.  This video was taken in late 1994.  In fact, our good friend and inkjet expert, Vince Cahill visited with Patrice and saw this machine working in early 1995.

Check out this video to see how they were doing it.

DTG Machine Maintenance – a Must Read if you own DTG

Where are the customers?