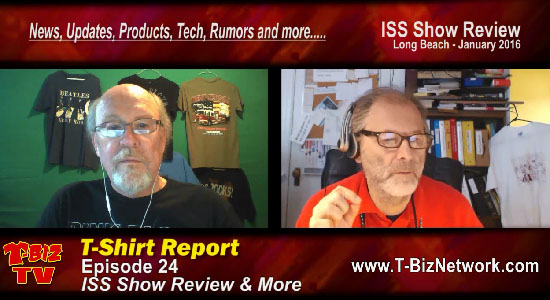 We just released Episode 24 of the T-Shirt Report. The T-Shirt Report is an industry internet vblog that we are doing with our very good friend, Richard Greaves. Each episode brings you Industry News and Comments, Tech Talk, Trade Show News and Reviews, Interesting Reading, focused topic segments, opinions and rants (of course) and much more. Episode 24 has a great review of the ISS Show (Imprinted Sportswear Show) held in Long Beach California in January 2016. Plus there is the usual industry news, rumors and a little tip section on printing nylon jackets.

Don’t miss the LIVE Webcasts with Scott and Richard from the SGIA Expo in Atlanta, November 4-6. View them HERE.

NEW – if you watch these videos at our YouTube channel there are Time Stamps in the comments section and you can simply click on the time stamp and go directly to the sections of interest. This makes it much easier to get to the meat of each video!

Episode 24 – February 21, 2016
This is a long episode but it has a great review of the Long Beach (January) ISS Show along with industry news and some helpful screen printing tips.

Episode 23 – January 5, 2016
We took a little time off over the holidays and finally got caught up with our SGIA Recap video. This 30 minute show covers highlights, rumors, new products, funny stories, Golden Image preview and more.

Episode 22 – October 21, 2015
This Episode has some great information on shop and screen room lighting, event printing and pitfalls, a simple test to see if your screen room is UV light safe, a FREE proof file you can downloads, a FREE Price Matrix that you can download and use to calculate prices, plus an update on the book A History of Screen Printing, and a complete pre-show warmup of the SGIA Show in Atlanta.

This Episode takes you back to memory lane and has a great section on the “famous” Fresener/U.S. Screen Print industry party held at the 2000 SGIA Show in New Orleans. People are still talking about this party. This Episode also has a good section on print/color sequence for garment screen printing.

Episode 20 – September 27, 2015
This Episode has a great review of the Saati Pro Screen Workshop held at Mind’s Eye Graphics along with a review of the M&R EcoRinse screen developing system. There are also good tips on the Epson 1430 printer and a review of the excellent August issue of Impressions Magazine.

Episode 19 – August 31, 2015
This Episode has has good discussions about Windows 10, the Epson F2000 DTG printer maintenance, a quick review of the book The History of Screen Printing, more comments on dehumidifiers, current trade show dates and more.

Episode 18 – July 28, 2015
This Episode has a detailed section on screen room humidity control, plus the latest trade show and seminar information, comments about the latest issue of Printwear Magazine, Windows 10, StahlsTV, the sale of Sawgrass and more industry news and rumors.

Episode 17 – July 21, 2015
This Episode has a good section on Richard’s visit to Sandlot Sports in Bay City, MI. There is quick industry news, a review of the Wearables Magazine June issue that has four excellent articles, talk about the Pro Screen Workshop by Saati to be held at Mind’s Eye Graphics in Decatur Indiana, Trade show updates and more.

Episode 16 – July 7, 2015
This Episode is devoted to industry news and a catch-up with Scott and Richard on how they have spent the summer. Scott was active in judging the Skills USA National Championship in Louisville, Kentucky and there is a good section here with video of the screen printing portion of that competition. There is also a short rant about Adobe Photoshop’s new CC 2015 and things they broke, plus talk about seminars being held at Mind’s Eye Graphics. There is also the usual quick Industry News and Trade Show update. Richard is doing a panel/seminar at the SGIA Expo in Atlanta on November 5 titled How I Learned to Screen Print featuring Mark Coudray, Rick Roth and others.

Episode 15, June 20, 2015
This Episode is a special edition video interview with Aaron Montgomery from www.CoastalBusiness.com and www.2RegularGuys.com. Aaron is an industry expert and this video was shot live at the NBM/Printwear Show in Indianapolis after his return from the huge FESPA trade show in Cologne Germany www.Fespa.com. This short interview has great industry insights into what’s new – especially in the sublimation and CadCut part of the industry.

Episode 14, May 31, 2015
This Episode is devoted to a very common problem all screen printers have – what to do with waste water, gray water, and how to minimize water use and how to recycle water in the screen making process. This important topic is covered with good technical detail along with great pictures and examples.

Episode 13, May 19, 2015
This Episode is very short and devoted to T-Shirt Industry New Products including the latest trend in semi-automatic screen coating machines from Vastex. www.Vastex.com and Lawson Digital and Screen www.GoLawson.com. These standalone and wall mount machines make screen coating much more reliable and easy. In this episode Scott and Richard also talk about a new automatic screen printing press from a company called Marcodie USA out of Arlington, Texas. wwwMarcodieUSA.com.

Episode 12 – May 19, 2015
This is one of our new shorter focused shows and it features timely industry news including segments on the new Brown Mfg. Firefly dryer, Kiwo’s new Multi-Tex emulsion, Augusta Sportswear’s line of camo shirts, ISS Show and NBM Show updates, a lengthy discussion about the closing of the famous New Buffalo Shirt Factory (kings of the black shirts), along with a quick Social Media book review, a few opinions and observations…. and more.

Episode 11 – May 5, 2015
This is a special episode with a long discussion of  the Greaves on Garments two-day seminar at Mind’s Eye Graphics.

Episode 10 – April 14, 2015
Episode 10 has a great section on sustainability, a good discussion about what “drain safe” means, how to convert files to halftone dots in Photoshop, the latest industry news and more!