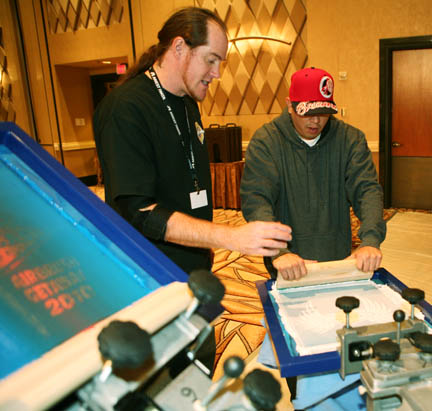 When we first started this site five years ago, Mike Fresener did some blogging on it. We have gotten things down to less bloggers but Mike’s blog had a great post about his entry into this business.

************
Mike Fresener here posting from a secret location deep in the Kentucky Wilderness. Blogging from this location gives me a unique perspective of the printing industry. Enjoy the ramblings that 40 years of screen opener will get ya!  Here is Part Two of my adventure.

If you want to see the inside of the secret supply depot you can find me here:

I like to joke that I’m the reason that kids aren’t allowed at the shows anymore. As a young boy going to trade shows was always a blast. During setup being shooed away from the booth was great! It meant not helping with set up and free reign of a convention center that was generally closed to the public, with almost no security (except for the loading dock). You would be amazed at some of the crawlspaces you could get into back then. Talk about “behind the scenes”!

“Gopher It Food Service – I work on tips” 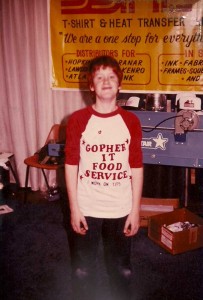 . One of my first private ventures. Finding myself with some time to kill during the trade show day, I noticed a lot of booths where only one person would be working it. With valuables all around, people didn’t want to leave their booths unattended or potentially miss out on new customers by leaving the booth empty. I saw a void that needed filling so I created “Gopher It Food Service”. I would walk the isles looking for people who needed a restroom or lunch break and I would stand guard at their booths handing out literature and taking contact information. While MOST people tipped pretty well, I did get the few “buy low, sell high” tips. Those people just had to fend for themselves in the future ;) I still see this need at the trade shows however, I think it takes a kid’s touch to pull off.

Back then there were a lot of other kids to play with. We were basically a ragtag gang of suppliers kids. We would run around and see what we could get into always pushing the limits of where we were allowed to go and what we were allowed to do. Balloon hunting was a good past time at first. Back when you were allowed to give away balloons in convention centers the ceiling was always covered with them. We would take one balloon, put tape on the top with a looong string and try to fish the others down with it. It’s funny to see these same people, now second generation suppliers, running their parents companies. No time for balloon chasing anymore, there’s WORK to do!

As I grew up so did the adventures. I don’t really recall the point when we transitioned to full time set up help. As we all matured the fun and games turned from the arcades to the bars. Of course there was the transition time when we weren’t old enough to go to the bars but were old enough to get into trouble (much of which I cannot put into writing to protect the guilty). “But that is another story” ;)

“Is it possible to buy a GOOD/CHEAP (Insert Product Here)?” by Aaron Montgomery

NewBie or Not NewBie? That is the question by Pat Fresener

Heat Transfer as a start to Direct-to-Garment