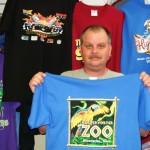 Some days I feel like a hairdresser. I know much more than I should. Over the years I have had the great pleasure of seeing a LOT of great shirt images of famous people, places, and things that came from FastFilms and now T-Seps. If you look at some of the samples on the T-Seps home page you see major movies, Disney images and much more. This is just the tip of the iceberg. These are just samples that printers sent me (getting samples is like pulling teeth). What you don’t see are the hundreds of thousands of images that have been done.  In fact you can read a few testimonials from happy users here.

In fact I tried to think of how many separations have been done with FastFilms and T-Seps and there is just no way to know. A huge printer in the UK (can’t name names), has done at least 3,000 separations with FastFilms. A few years ago in Munich at Fespa a user came by the booth and left a catalog with at least 500 printed shirt images in it and said “all done with FastFilms” (he upgraded to T-Seps). FastFilms was released in 1999 and with at least 11,000 users of both programs my guess is the answer is easily hundreds of thousands of separations from a “simple” little Photoshop plugin.

Just to give a taste, in the last few weeks I have looked at images from T-Seps users for Hootie and the Blowfish, the racetrack Saratoga, Toy Story 3, Captain Morgan Rum, a great image for the comeback tour for Mickey Gilley, an F35 airplane image for Lockheed, Duck and Turkey stamp images for the state of Arkansas and more. That is just images people have sent me. Why do I see these? In many cases it is a brag from customers. “Hey… look what we are doing?” In other cases it is to simply get the masters touch and see what routine I might run and what tweaks I might do.

Why don’t I show more of these? Simple. My customers don’t want the world to know that they are using T-Seps or FastFilms and in many cases they are just a contract printer for someone else who has the rights to show the image. Mums the word. I am usually told “don’t pass this around” when I get these images.

In fact, I know how my program works so well that my wife gets sick of me going into Walmart, Target or airport gift shops looking at shirts saying “T-Seps, T-Seps, T-Seps.”

But – at the end of the day it brings a huge smile to my face knowing that I had a hand in helping printers look great. After all, their customer has no idea who Scott Fresener is or what T-Seps or FastFilms is. They just know that someone performed magic on a T-Shirt!