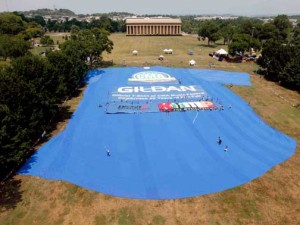 Gildan Activewear unveiled a huge T-shirt at Country Music Association Music Festival in Nashville on June 11. The gigantic T-Shirt measured 281.3 ft. (85.74) in length and 180.9 ft. (55.14 m) in width. This set a new Guinness world record for the Largest T-shirt.

Gildan also announced that it will be donating 12,000 T-shirts to Keep the Music Playing, a charity initiative introduced by the CMA in 2006, which supports music education in Nashville-area schools. “We’re excited to not only break the Guinness World Record but also, more importantly, to align ourselves with Keep the Music Playing through our donation, as youth and education have always been a focus of Gildan’s community involvement initiatives”, says Randy Brown, Vice President, Gildan Retail Sales.

The T-shirt  beats the previous Guinness World Record set in 2010.  The fabric for the T-shirt was produced at one of Gildan’s state-of-the-art textile facilities and final assembly took place in Utah.  The T-shirt was rolled out at Centennial Park by over 100 volunteers and overseen by Guinness.

The unveiling served as a kick-off to Musician’s Corner, a weekly outdoor concert series.

Fresener-Greaves T-Shirt Report is Back! Check out our latest show.