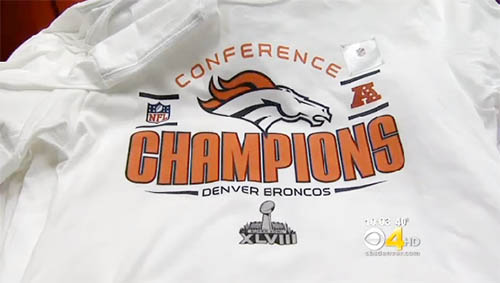 Every year T-Shirt printers in certain regions of the country gear up to print Football Championship shirts and then – if the stars are aligned – the final Super Bowl Champion shirts. Typically, large companies like VF Licensed Sports, Reebok, Nike and others go to cities with teams that are in the playoffs (four teams) and they contract with local printers to be ready with screens burned for the various ways the final games could turn out and be ready to print the minute the game is over. Companies generally contract to print for 12 to 24 hours straight with a normal guarantee of around 10,000 shirts or more!

The bad news is during the final championship playoffs – there are losers and the printers go home after the game is over. The good news is the teams who go to the Super Bowl need their Championship shirts in stores the next day. Department stores and all the major sporting goods stores have standing orders for shirts – it their local team wins.

Once the dust has settled – and everyone knows who is going to be in the Super Bowl – those printers gear up for the outcome. They have screens burned both ways and yes, they even print some shirts of each outcome. Why? Where do you think the shirts come from in the locker room after the game? Typically, shirts with the “wrong” winner are destroyed but in many cases they are shipped overseas to needy charities and children. Here is a good article about what will happen to this year’s “wrong winner” shirts that can’t be sold in the US.

Here are a few news articles that we sniffed out pertaining to companies in Seattle and Denver who will have crews standing by to work all night – or not.

UPDATE:  This article was first written around the send of the first half of the game. Oh well….. the writing was on the wall and as you know – Seattle won and my guess is printers in Seattle are VERY happy and printers in Denver went home!

WIFR.com – TV Station in of all places – Rockford, IL. Watch video about Guerilla Graphics who was printing 50,000 Super Bowl Champion shirts to be shipped to the Seattle area.

Here is a video we shot in 2010 with a large Super Bowl printer. The teams are different but if you want to learn how this process works check out this short video.