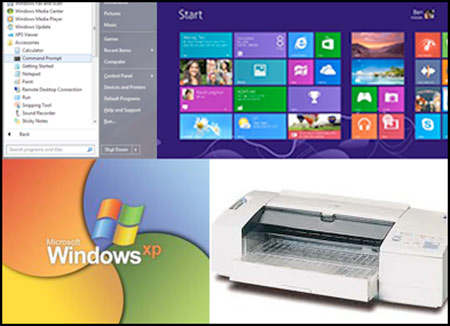 Manufacturers use the term End of Life or “EOL” when a product has run it’s course and it is time to retire. We are seeing that now with Windows XP and the Epson 3000.

Microsoft announced that after April 8, 2014 they will no longer support Windows XP. Read more here. Not a day goes by that I don’t talk to a customer still using Windows XP. Hey….. it has worked all these years. Just because Microsoft is discontinuing support doesn’t mean users won’t drive them until they drop.

The bad news is about the only choice is to upgrade to Windows 8. I personally think Microsoft made a HUGE mistake when they made such drastic changes to their operating system. I even believe  they drove customers away by the millions and had a major effect on the sales of new computers!

I talk to customers EVERY DAY who have been forced to upgrade to Windows 8 – and they hate it. I had a major computer crash last week and even thought I have had a Windows 8 computer for software testing – I kept putting off using it every day until my old Windows 7 computer crashed.

The best thing I did was upgrade to Windows 8.1 AND install a program called Classic Shell. I WANTED MY START BUTTON AND MY FAMILIAR DESKTOP! Now that I have Classic Shell installed on my Windows 8.1 operating system – I feel right at home. I have my old desktop back and I can click on START and find Control Panel, Printers and Drivers and all other programs – just like the old days.

The same is almost true for the Epson 3000. My guess is I talk to four or five users of the Epson 3000 for film output – every week! Even though that product is well beyond EOL – people still use them. But, recent word on “the street” is that there are almost no more print heads available for the Epson 3000. In fact, one of the industry’s well known Epson 3000 refurbishers is down to just a few heads and will discontinue offering refurbs when they are gone.

RIP Windows XP and the Epson 3000. You served us well!